Boarding is at the heart of the Marlston House experience.  The wide range of boarding options means our national and international full boarders are constantly surrounded by local pupils who enjoy the very popular flexi-boarding option.  Everyone can thus feel that sense of belonging to a close-knit boarding family. It is a very special and positive experience.

The benefits of boarding at Prep School continue to be well recognised and children gain a sense of independence and personal responsibility. They learn organisational and social skills, partake in many extra-curricular activities and, through this experience, they develop strong friendships for life. Prep school boarding is also an extremely valuable experience for any child who may be considering boarding at their senior school and the time saved in commuting provides the opportunity for further academic, creative or sporting pursuit.  Our extensive grounds and magnificent facilities mean that interests and talents can be nurtured and developed in whatever direction they may lie.

We want every girl to feel as much at home as possible. They can decorate the walls around their beds and keep toys and special bits they want to bring from home.  In the evenings they will enjoy having fun with their friends – taking part in organised activities, playing games and relaxing.

Our Houseparents are the main link between School and home and communicate regularly with boarders’ parents. Especially sensitive to the needs of younger and first-time boarders, boarding staff are also regularly in touch with the children throughout the day.  Whilst we restrict the general availability of pupils’ mobile phones so they aren’t playing games on them, we understand that even the briefest telephone call can mean the world to a parent of a child at boarding school and we ensure that pupils are able to contact home whenever they would like to.

Full boarders are a very important part of the school and great care and provision is given to ensuring their welfare and happiness.

Weekends are very busy and fulfilled and the House parents and his staff are available at all times to meet the needs of both the boarding pupils and their parents. Boarders have their own common rooms in which to relax and full use of the school’s outstanding facilities.

We have a flourishing system of flexi-boarding, which allows pupils to board for one or more nights a week including at weekends according to their choice. Our system of flexi-boarding gives pupils all the fun that is shared in a boarding community and enables them to take advantage of the many hobbies and activities provided for the boarders.

By living together, boys learn to share and to have consideration for others and, with encouragement, they learn to stand on their own feet and, increasingly, to shoulder responsibility.

Brockhurst and Marlston House has a long and close connection with the military dating back to 1884. It’s a connection and understanding that remains just as strong today.

We understand the unique challenges that military families face when choosing how and where to educate their children. At the School we aim to provide flexibility and support to ensure that your children receive the very best education and care, wherever you are posted.

Our staff understand the military community and know how best to support and nurture the children of military families.  Within school they are always surrounded by a large number of friends and kept engaged with a range of academic and co-curricular activities both during the week and at weekends.  At all times resident staff are always on hand to listen, guide and mentor each child to ensure their wellbeing and happiness.  Our military families also enjoy the flexibility of midweek visits, time away together at weekends, and phased pick up for Exeat weekends.  Travel arrangements at the beginning and end of terms can be arranged through staff at the school with flexibility where possible to suit your needs.

In recognition of the distinguished relationship between the School and the military, we are proud to offer the discounts below to boarding families. In addition to the CEA allowance, this discount can be combined with a means-tested bursary:

'Pupils feel safe, supported and happy in both the school and boarding communities.'

This is what one of our families had to say: 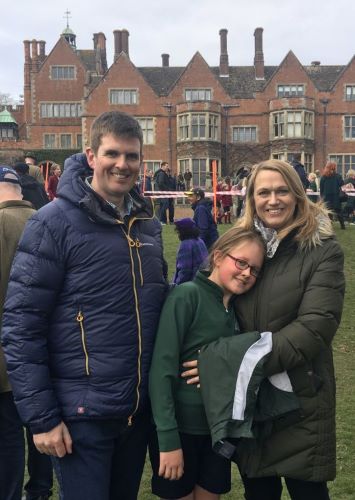 Our daughter was only eight years old when she was about to start her third school, and with another posting on the horizon, it was only a matter of time before that became the fourth, fifth and sixth.  It was clearly taking a toll on all of us and we decided, with some trepidation, that boarding would provide us the continuity and stability of education we sought.

The early days of our school search will be familiar with many military parents.  We were driven mostly by location as we knew we wanted a school in the South of England; somewhere close enough to family support, but also, assuming we would be posted along the M4 corridor at some stage, close enough for exeat weekends and half term.  Thereafter our priorities included a school with excellent boarding facilities, especially if we were to be posted overseas, as well as the ‘right’ values, opportunities to try new things, a nice setting and school leadership that understood the military community.  We also had to be convinced that our daughter would be happy amongst the other kids, and of course, fees and finance were key.

We visited five schools before stumbling across Brockhurst and Marlston.  There was nothing obvious that ruled out those five, we just didn’t get ‘the feeling’.  Yet when we first visited Brockhurst and Marlston we drove away asking ourselves why we wouldn’t choose it.  We knew immediately it was the school for us.  It was conveniently located only five minutes from the M4 Junction 13 (Newbury / Hermitage), the boarding house was warm and homely, the facilities were incredibly modern, yet the school values were traditionally charming.  Despite being so close to the M4, the setting is rural countryside, with plenty of green space and woods for children to play in.

Children are initially taught in single sex classes, with boys in Brockhurst and girls in Marlston House.  But as they get older they are increasingly taught in mixed classes. This single sex education, but in a co-education school and setting is unusual, but exactly what we were looking for – the best of both worlds!  The school leadership also impressed; they instinctively understood the military community and were passionate and professional about the school family.  And the financial support to military families was equally attractive.

A taster day and boarding experience followed, both of which were pitched perfectly for a new pupil, and shortly afterwards, she started full time.  She has loved every minute of her journey at Brockhurst and Marlston.  Two years in and she feels completely at home.  We have watched her grow in confidence and maturity, learn to play the flute, gain new skills and try some amazing things.  Her boarding experience has been equally exciting.  There are plenty of military boarders, but it doesn’t feel overwhelming.  There is never a dull moment in the boarding house and weekends are spent on trips to London and Harry Potter World, or cinema, trampolining and go-karting.

We are delighted with Brockhurst and Marlston and it has been such a relief to find it.  It has taken a huge weight off our shoulders, she is happy and thriving, and it’s given us the continuity and stability we were looking for.  We couldn’t be happier.